Home>Blog>Are You a Candidate for Laser Tattoo Removal?

Are You a Candidate for Laser Tattoo Removal? 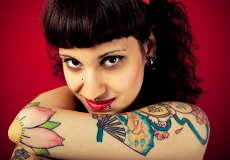 Tattoos are so popular that roughly 10 percent of Americans have one, whether it is big or small. And while tattoos are supposed to be a permanent fixture on the body, 50 percent of tattoo wearers later want them erased. Luckily, laser tattoo removal has made this possibility a reality for most people. Is your tattoo removable via laser?

Lasers, or high-intensity light beams, are used to break up the ink pigment of an unwanted tattoo. Black ink is the easiest to remove because it absorbs all laser wavelengths. Colored inks, on the other hand, require special lasers with varying wavelengths to break up the pigment. Once the laser breaks up the pigment, it is reabsorbed by the body’s natural immune system.

Laser tattoo removal requires multiple treatments, usually 6-10 sessions, based upon the size and colors of the tattoo. To aid healing and allow the fragmented ink to be reabsorbed by the body, sessions are scheduled 4-8 weeks apart. Laser tattoo removal sessions involve:

Most patients describe the discomfort during laser tattoo removal as moderate, similar to the pain of an elastic band snapped against the skin or a splatter of grease from a frying pan.

It is unrealistic to expect there to be no indication of a former tattoo after treatment. There is often a faint scar or mild skin color change at the site. For best results, it is important to seek tattoo removal from a professional dermatologist or plastic surgeon.