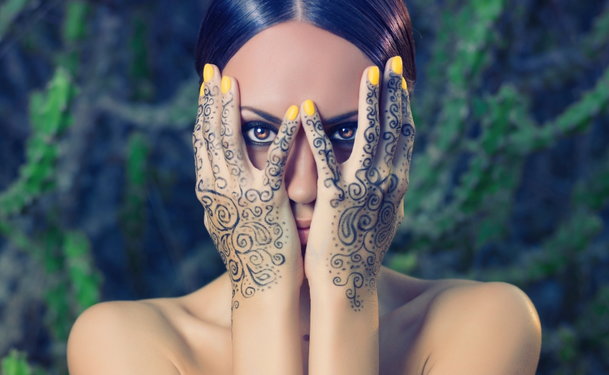 Black Henna: What It Is & How It Works

What is black henna?

Black henna is partly fermented, dried indigo plant dye. Called "black henna" because it is often used in combination with henna and other additives to dye hair black, the indigo plant itself will not cause any staining.

What is the history of black henna?

Black henna is a plant product that has been used as hair dye—mainly in African and Asian countries. Traditionally, it has been used for special anniversaries such as weddings. The dye is placed on various parts of the body in intricate handmade designs. With a large influx of Asian migrants into North America, this dye has become very popular in North America. Most tattoo artists in North America offer the service.

What is the difference between black henna and the natural brown henna?

The natural henna used by Asians is red-brown in color and usually stains best on the hands and legs. It also fades rapidly. Black henna stains intensely and can be applied anywhere on the body, except the face. Black henna usually has several additives to generate an intense black color. Kits available over the Internet generally do not offer a quality product that lasts long or stains well.

What other additives are found in black henna?

In the 1990s, henna artists began to experiment with adding para-phenylenediamine (PPD) to the indigo plant. This was an attempt to increase the intensity of the stain.

How is PPD used for dye?

PPD is added to the indigo plant to intensify dye color. When used in hair dye, the PPD concentration must be less than 6 percent. Warning labels may warn that PPD and the dye should not touch the face area and any exposure to the eye must be rinsed right away. Dependent on the tattoo artist, the combination of the dye and PPD concentrations may vary from 6%-10%. Once PPD is added, the mixture is left on the skin for about 10-30 minutes.

Does application of black henna hurt?

No needles are involved in the applications of the dye. It is painted on the skin with a toothpick or cotton swab. Only the outer layer of the skin is painted. This dye is never meant for consumption or injection.

How is the dye applied?

Black henna has a consistency of toothpaste and is applied with a toothpick. Once painted on the skin, it is left to dry, which may take about 30-60 minutes. As the paste dries, a crust is formed; it falls off on its own. One can even remove the dry crust by washing with water. Depending on the complexity and size, most black henna tattoos take about 30-60 minutes to apply. Black henna dye can readily stain clothes so caution during application must be exercised.

How long will a black henna tattoo last?

Black henna tattoos usually last 7-21 days, depending on the skin. Everyone's skin sheds differently. The majority of individuals may begin to see fading in two weeks and the tattoo usually is gone by the third week. Only rarely is the tattoo present after the fourth week. Showering and bathing does not affect the duration of the tattoo. Unfortunately, once the tattoo is applied, it can't be removed and must be allowed to naturally fade. However, washing the area multiple times a day may help expedite the removal.

Can black henna be applied anywhere on the body?

Black henna is not supposed to be applied in the mouth, eyes, nose, or face area. Black henna should not be used on children or pregnant females.

What are some of the side effects associated with black henna?

Unlike natural henna, a number of individuals may experience allergies to black henna because of additives. A test application area is advisable prior to beginning any application.

PPD can cause severe allergic reactions, with blistering, itching, permanent scarring and sensitivity. Estimates of allergic reactions among black henna users range between 3 percent and 15 percent. Henna is not responsible for these reactions, rather para-phenylenediamine is often the cause and is illegal for use on skin in many western countries, though enforcement is not strict.