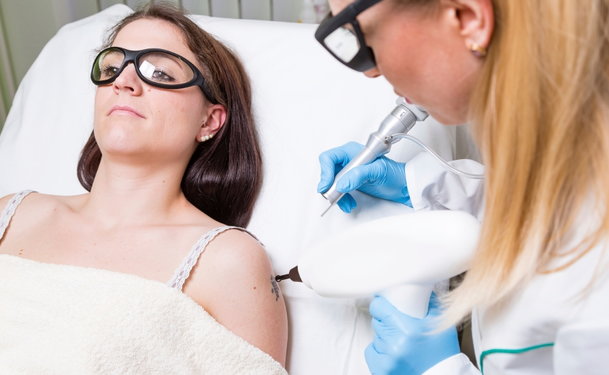 According to the American Society for Dermatological Surgery, nearly 100,000 tattoo removal procedures were performed in 2011— up 20,000 from the year before. With such a growing demand, manufacturers are continually trying to produce laser devices that more effectively remove body art and better meet the needs of patients.

After almost a decade of research and development, the FDA-approved PicoSure laser workstation is now being touted as the first safe and effective picosecond device to remove not only tattoos, but also benign pigmented lesions that form when skin cells produce too much melanin in one area.

PicoSure works by delivering short, rapid bursts of energy to the skin in a trillionth of a second. Photothermal and photomechanical effects—caused by the ultra-short pulse durations— break up and destroy the color pigment, while leaving the surrounded tissue unaffected.

Until just recently, the Q-switch nanosecond laser was the most common tattoo removal device, distributing pulses in one billionth of a second. The Q-switch acts much like the PicoSure, in that it uses selective photothermolysis. This process precisely targets ink using various wavelengths of light. The energy produces heat that damages and breaks apart the ink particles which are then readily absorbed by the body and expelled. The difference, however, is that the Q-switch permits lower pulse repetition rates, longer pulse durations and higher pulse energies. Therefore, the laser only generates a tiny fraction of the power produced by the PicoSure, which operates in picoseconds.

The picosecond laser has such extremely short pulse durations that it can produce pulses that have a vast peak power and can more accurately center energy onto a small area of space. A tattoo that used to take 15-20 treatments can now be removed in an average of four to five; meaning, most tattoos can be cleared faster and within half the time.

Out of 15 patients who enrolled in a clinical study with dark, 2D tattoos, three-fourths showed a clearance of greater than 75 percent within three to four treatments. Another five patients with benign pigmented lesions saw a clearance of 100 percent by two treatments. The technique had improved their skin texture, including hypertrophic and atrophic scars. (The market for pigmented lesion removal is nearly twice as large as the market for tattoo removal.)

A separate study performed by Dr. Roy Geronemus, director of the Laser & Skin Surgery Center of New York, analyzed 22 subjects with multicolored, difficult-to-remove tattoos. After two weeks of treatment, the patients had a tattoo clearance greater than 80 percent and on average, 94 percent clearance was obtained when the device was used on blue and green ink.

The PicoSure works best on black, green and blue inks, but is also effective with yellow, orange and purple inks.

Which areas of the body can be treated with PicoSure?

Areas that can be treated include:

Side Effects of PicoSure

According to Boston dermatologist Kenneth Arndt, who conducted one of two clinical studies on PicoSure, the skin reacts to the pulses and heat generated by the PicoSure better than other devices in its class. He observed that wounds heal much faster after PicoSure treatment since the laser focuses on the surface of the skin and its application is targeted so that it does not harm areas surrounding the treatment site.

The side effects — blistering, crusting and swelling— are nearly the same as those produced by other lasers, including the traditional Q-switch, but they are minimized. Patients only experienced slight blistering, some crusting and mild pigmentation alterations. These issues, however, are a result of the thermal effects and laser pulses that penetrate the surface of the skin at rapid speeds.

Patients involved in the studies reported low to moderate pain during the procedure, which is performed under local anesthesia. Immediately after therapy, they noted that their pain had subsided. Also, swelling and blistering cleared up within one week— it takes several weeks of healing with other laser tattoo removal techniques. Some hyperpigmentation and hypopigmentation were also reported, with hyperpigmentation more likely to occur in patients with darker skin.

The benefits of PicoSure include:

What It Boils Down To

Though PicoSure has proven to be successful, it does have some limitations. The laser device was shown to be less effective when the patient smokes, or when the tattoo is larger than 30 cm wide, older than three years or located on the legs or feet. PicoSure also may be less effective for removing patches of color that are extremely dense. In such cases, more sessions will be needed to achieve comparable clearance results like that of the studies.